10 months seizure free, brought to you by ketones!

Without question, this journey has been the closest to witnessing a miracle that I think I’ll ever experience.

7 months seizure free! I have no words… I still can’t believe it.

This has been a journey I never imagined myself on, but I am so, so thankful to have become a part of such a supportive community.

I can’t believe we’ve reached this milestone. 6 months ago, I didn’t realize the impact that the ketogenic diet could have on Reese’s epilepsy. We celebrate every seizure free day! 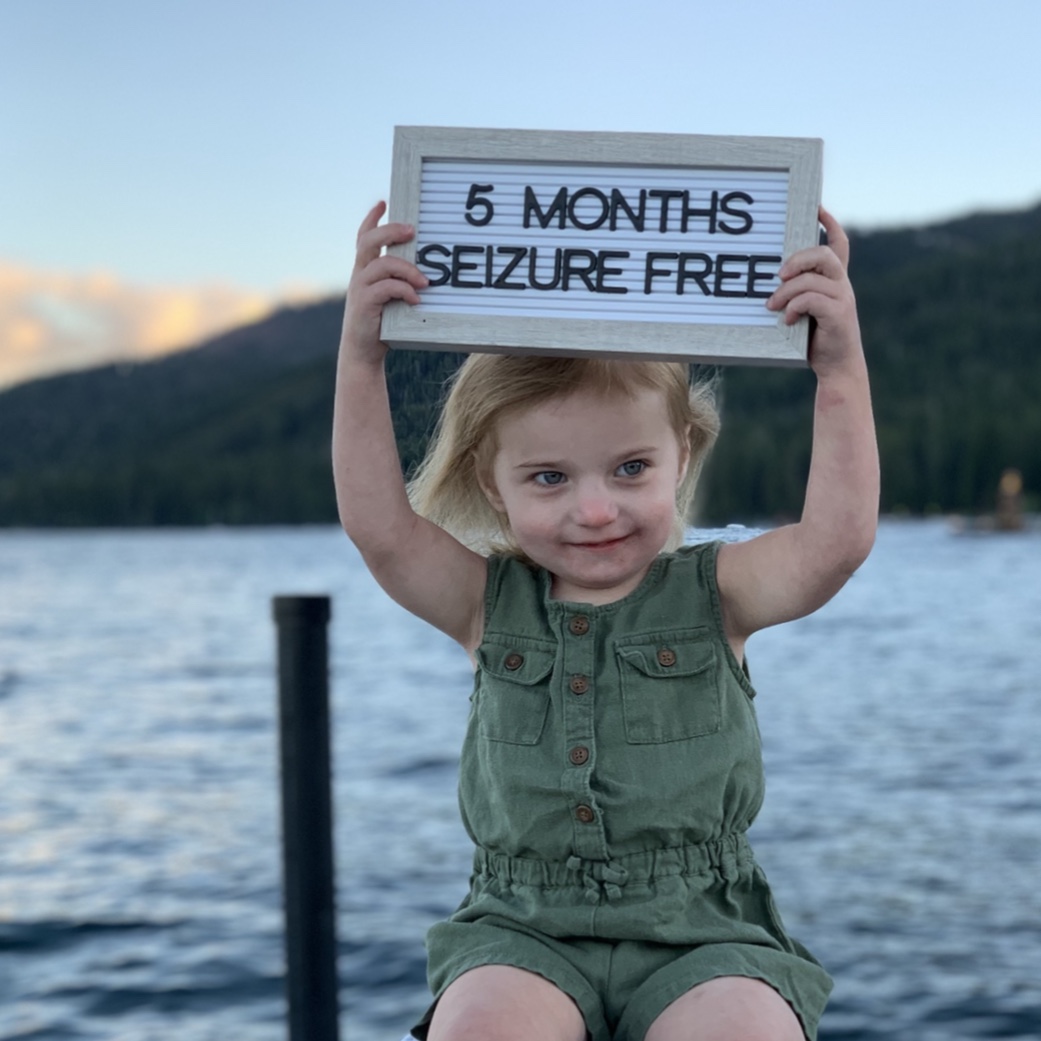 When we started the ketogenic diet on New Years Day, I couldn’t have even dreamed of 5 months seizure free! Today, we are celebrating!! 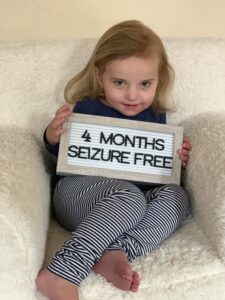 How is this even happening?!  It’s still unreal to me.

I am thankful every single day for finding out about the ketogenic diet for epilepsy.

I am thankful every single day that is has given Reese the seizure control we thought we could only dream of.

We came down in early December, having been aware for several months that Reese had epilepsy. We thought it was a “normal” epilepsy and naively weren’t all that worried about it – we were hopeful that with a little tweaking of meds, she’d be fine. Her seizures were myoclonic – blink-and-you-miss-it – so somehow we didn’t consider that while they were very short, they were wreaking havoc on her developing brain.

About a week before we left for Disneyland, we did a routine EEG and a day before we left for Disneyland, we got a call that the neurologist wanted us to come in immediately. I knew that couldn’t be good. I asked if I should cancel our Disneyland trip, but they said coming the day after we returned home would be fine. As I’ve said before, that Disneyland trip had a cloud over it. I didn’t know what was coming, but I knew it wasn’t good. We were committed to enjoying ourselves anyway and Reese loved Disneyland! Or so we thought. In hindsight, her personality at Disneyland (and the months before) was sort of comatose. She would get very serious on the rides – we thought she was taking it all in. She did seem to get a kick out of it all, but it may have also been a bit of stimulation overload for her.

When we returned home, we got the news – Reese’s epilepsy was worse than we had all imagined. I just wanted to be back at Disneyland – my happy place. I’m able to live in the moment at Disneyland. But instead, the rest of our December consisted of weekly doctor visits, starting a high dose of prednisone, having all the hopes imaginable after having our first seizure free day, being crushed when the seizures came back, getting immediately admitted into the hospital for a 10 day stay, starting a much stronger steroid, switching neurologists, stopping all current meds, starting several new meds, and starting the ketogenic diet.

The last few months have been an emotional roller coaster, to say the least.

Since we got the awful news, I kept thinking and dreaming about Disneyland. No matter where Reese’s development was, I felt she’d enjoy the sights, sounds… and smellilizers! I quickly decided that once she was off the medicine that suppressed her immune system (we were effectively quarantined for 3 months), we’d come back to Disneyland. I wanted to take Reese back to my happy place and just live in the moment again. I started counting down the days.

Well… we’re on our way! Packing for Reese’s ketogenic and other medical needs has been a challenge, but I’ve always been up for a good challenge. Especially one where Disneyland was the goal!

At this point, I think it’s safe to say I’m more excited about this trip to Disneyland than the average 6 year old. 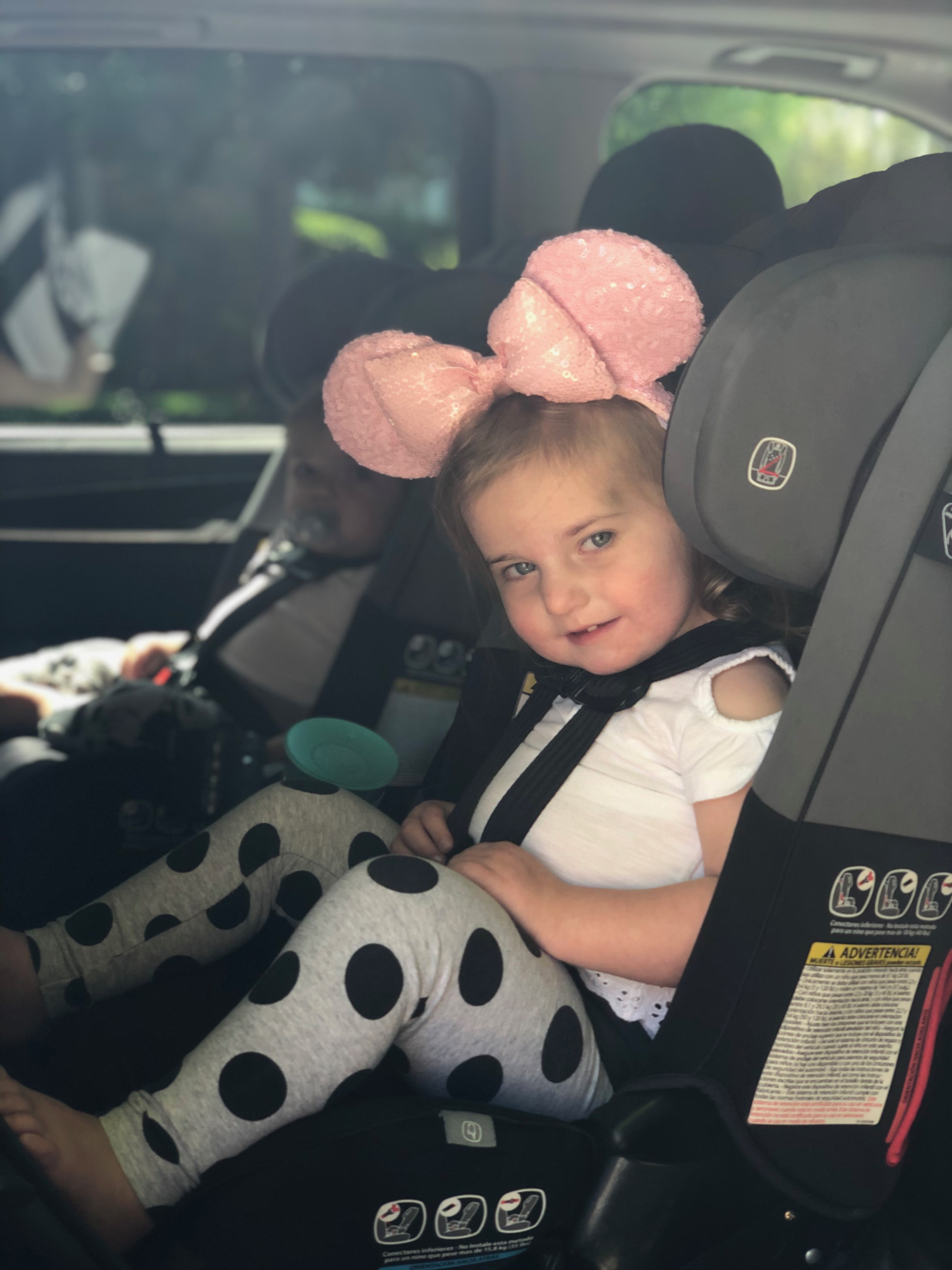 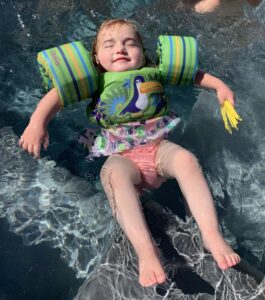 Before seizures, Reese loved the water. While her seizures were uncontrolled, she wasn’t able to enjoy the water. Today was a big milestone, and spending time relaxing in the pool was a good reminder of what Reese is able to enjoy again now that the seizures are under control.

But we’re not taking this time for granted and know the next one could be just around the corner – we’re currently weaning from medicines, which makes me so happy but also so, so nervous!

If I’m being honest, the last couple weeks have been hard.

Reese has been fighting taking her medicines so every morning and every night have been a struggle.  It’s draining.  I can’t say that I blame her – they have a strong, awful taste that I wouldn’t want to have to take.  We do the best we can, but between the medicines and the supplements, there are just a lot.

Also, since weaning from the ACTH, her appetite has become nearly non-existent.  At this point, I’d be really happy (and surprised) if she ate 2 meals a day.  She didn’t have much of an appetite before the ACTH, but I was hoping that being so hungry while on the steroid would have some lasting effects. 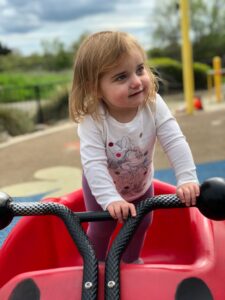 Reese did some neurological testing a few weeks ago.  We knew she has at least a moderate speech and language delay, but we wanted to see where she was in other areas.  In the questionnaire beforehand, it asked Reese’s strengths and one that I wrote was problem solving.  She tucks things under her chin if she wants to carry more when her hands are full and once at a play kitchen, she couldn’t reach the microwave so she popped the sink out, flipped it over on the floor, and used it as a step stool.  Family and friends seemed pretty impressed with her problem solving abilities, so I don’t think I’m the only one who felt it was a strength.

We got the results and Reese has a global developmental delay – she’s around the 10th percentile in every area (including problem solving) except for gross motor.  For gross motor, she’s age appropriate.

It was a punch to the gut.  Something I thought was a strength of hers was actually not a strength at all.

While the seizures were uncontrolled, we would read stories about other children and how it was like someone hit a pause button on development.  Reese was improving (albeit slowly) so we thought this didn’t apply to us.  We realize now that it’s exactly what happened. 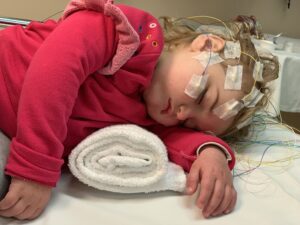 Reese had another EEG on Monday and then saw our neurologist on Tuesday.  Thankfully, the EEG was (again!) considered normal.  So now we are going to wean off the Vigabatrin (which was already a low dose) over the next couple weeks and then possibly start weaning off the Onfi.  Lately Reese’s coordination seems a little “drunken sailor” and we suspect it’s the Onfi, but don’t want to wean 2 medicines at once, so we decided to just tolerate her clumsiness for a few more weeks.

I mentioned to our neurologist the results of Reese’s developmental testing.  He was very positive about how far we’ve come and felt that she has time to catch up.  I made some throw away comment like “maybe considering the Lennox Gastaut and where we were in December, we should consider ourselves lucky that we’re even on the curve.”  He quickly agreed, which helped to put things in perspective.

Since getting the results of the testing, I’ve enlisted my sister (who is a Montessori teacher) to help me find new ways to help Reese continue to improve.  What a wonderful resource to have in our family!  I’ve already noticed that Reese’s attention span has improved, so I suppose the positive part of the testing is that it served as a good wakeup call.

I do believe that Reese will catch up a bit (exactly how much, I don’t know).  It just bums me out that she’s having to work twice as hard just to be where all the other kids are.  It feels like we’re farther away from normal than I thought we were.  But that’s okay.  Maybe I should have written that Reese’s strength is her persistence, and that is really an excellent trait to have.

This is not a medical website.  I am not a medical professional and am not giving medical advice.  The ketogenic diet needs to be prescribed and closely monitored by a doctor.  This is simply our journey and what worked for us.
This site contains links to products that we enjoy on Amazon.  Purchasing the items using my links may result in my receiving a small commission.  Thank you!