It’s been a busy week!  We started with an EEG, then finally had our second opinion with UCSF, and just had a follow up appointment with Dr C this morning. 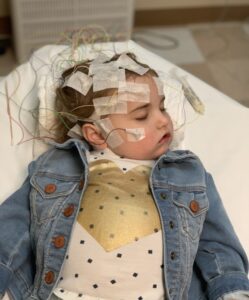 The 30 minute outpatient EEGs aren’t my favorite.  I certainly like to know what’s going on with Reese’s brain, so they’re well worth it, but Reese is like me – she likes to get a healthy amount of sleep.  Keeping her up until 11pm and then waking her up at 4am is sort of rough on both of us.  Her EEG was fairly uneventful.  She got hooked up and immediately fell asleep (which is what they like).  She had a few slight hand or foot twitches that I wouldn’t think twice about if my son did it, but when Reese does, I always get a little nervous.  I was glad to have it on the EEG so we could see if they were anything noteworthy.

UCSF was another early morning.  During the drive there, Matt and I discussed how much different this doctors appointment would be than we anticipated when we asked for a second opinion all the way back in November.  At that time we were desperate for answers, hoping to find anything that would work, and possibly even interested in hearing about any relevant drug trials.  Now, I guess we just wanted to be assured that we were on the right track.

At the appointment, we went over all of Reese’s history, the meds she was and is taking, and the improvement we’ve seen in the last month or so (both in terms of seizure control and her development).  The doctor was surprised that the ketogenic diet was working as fast as it did for Reese.  She was almost doubtful – she really hadn’t heard of it working that fast.  She said that usually they’re having to continually encourage parents to stick with the diet for at least 3 months to see possible results.  Our dietician has heard of it working that fast – she’s mentioned that she thought Reese is a super-responder.

The doctor at UCSF felt that if Reese hasn’t had developmental delays yet, she won’t start having them now while she’s seizure free, which was wonderful to hear.

We asked for a diagnosis since we still don’t really have one.  She felt it probably wasn’t infantile spasms, but was possibly Lennox Gastaut or Doose Syndrome, and if she had to guess, she was leaning towards Doose syndrome (mostly since Reese hasn’t had delays aside from her speech, even though Reese hasn’t had any atonic (drop) seizures which is a hallmark of Doose Syndrome).

The thing all of Reese’s neurologists can agree upon is that she’s a unique case and doesn’t fit nicely into any box.

She felt we could start tapering meds and by and large agreed with what Dr C was doing.  We have always had a lot of faith in Dr C, but this really just confirms that we’re in the right place and doing the right thing.  It was an encouraging appointment all around. 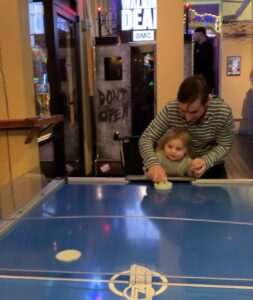 While in San Francisco, we went out for lunch on Pier 39 to celebrate and even went to play a couple of games at the arcade at the end of the pier.  It felt like our first normal day in a long, long time (although we were missing Nicholas!).

This morning, we had a follow up with Dr C.  He was very pleased to hear that Reese has gone over 1 month seizure free.  Reese has been doing regular bloodwork and last weeks came back with low potassium levels, which sometimes can happen on ACTH.  Also, her electrolyte levels were low.  Unfortunately, this didn’t surprise me at all – for the past week, she would wake up and be sort of shaky.  She’d drink a few small glasses of water and then be fine.  I found a carb free, sugar free, calorie free electrolyte drink and had just started giving it to her.  The day after the blood draw, the nurse called and requested we repeat the labs.  We did, and that night Dr C called (I maintain he doesn’t sleep!) and we added a potassium supplement since her levels were still low.  We went over that and discussed the continued taper of ACTH and then weaning from the Vigabatrin after that.

When we were in the hospital, Dr C was aggressive with meds and now that Reese is seizure free, he said he wanted to be conservative with tapering off meds.  I hate that Reese is on so many meds, but the thought of tapering off them makes me anxious.  I have gotten the taste of a seizure free life and I don’t want to lose it!  But I know that tapering off meds is in Reese’s best interest – we can’t leave her on 10 meds forever, even at the risk of having another seizure (if we learn that a medicine was more important than we thought, we could always add it back).  He felt that the meds helped, but that the ketogenic diet was doing the heavy lifting, and I agree.  I’m happy to go the conservative route on weaning from the meds.

We discussed how Reese’s speech was coming along and how her receptive language has improved as well.  During our visit, Reese high fived, waved at, and said thank you to Dr C.  He commented that she didn’t do that when he first saw her.  It’s true – she’s improved a lot in the past couple months since her brain has been given a chance to rest.  It’s so nice to have a doctor that sees Reese as a whole child and not only noticing her seizures.

But the absolute best part about the appointment: Dr C said that Reese’s EEG from 2 days ago had normalized.  Wait, what??  Like… normalized, normalized?  I still can’t believe it.

I am not much of a dancer, but I practically danced on out of the doctors office.

View all posts by Maggie

1 thought on “Ending February on a Good Note”

This is not a medical website.  I am not a medical professional and am not giving medical advice.  The ketogenic diet needs to be prescribed and closely monitored by a doctor.  This is simply our journey and what worked for us.