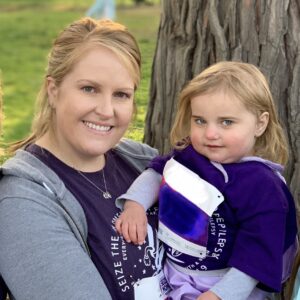 Having a child with epilepsy (or any life changing medical condition, I would imagine) can feel very isolating.  Although I know I’m not the only one living this way, sometimes it feels like it – living EEG to EEG, days on end in the hospital without any advance notice, at times having more doctors appointments planned than social outings, and turning into the helicopter parent I never wanted to be (so guilty!).

This weekend, our entire family participated in a local 5k to raise awareness (and money!) for epilepsy.  It was quite moving to be surrounded by other people who are affected by epilepsy.  Everyone was so positive despite this awful common thread we all share.  It is clear that epilepsy affects the whole family.

I have enjoyed meeting other people in the same boat.  People whose heart stop every time their child flinches.  People who now all too well what to do in the event of a seizure.  And even people who understand the thrill of measuring out exactly 20.00 grams of butter on the first try! 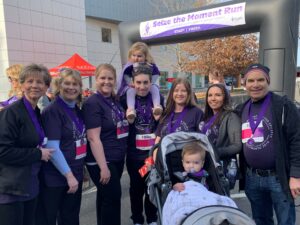 I have long considered starting a local support group, and this weekend has made it more apparent that it’s something I’d like to do.  It’s hard to stay positive 100% of the time.  Really hard.  Feeling a part of a community during a time like this is so, so important.

View all posts by Maggie

This is not a medical website.  I am not a medical professional and am not giving medical advice.  The ketogenic diet needs to be prescribed and closely monitored by a doctor.  This is simply our journey and what worked for us.
This site contains links to products that we enjoy on Amazon.  Purchasing the items using my links may result in my receiving a small commission.  Thank you!